I’m just back from a exciting and restful trip to Mexico in which I ate my way through my vacation, spoiled by my nieces who know my penchant for being a foodie. As always I’m taken aback by the staggering variety of foods and dishes one can consume on the street, restaurant, beach or home. None of the foods resemble what “Mexican” food looks like here in the States. In fact, I’m not sure they would always appeal to the American palate. For certain, Mexicans love to eat their way through the day with dishes and snacks that seem to always evolve, yet maintain their Mexican character. Here are some of my findings!

Ceviche in the Manzanillo area is an ubiquitous dish every beachgoer indulges in. It is customary for vacationers to sit under the large umbrellas and feast all day on this refreshing dish.  It is made of ground up fish such as snapper marinaded in lime. Sometimes shredded carrots and tomato are added. It is served on small tostadas with another squeeze of lime. Of course it must be followed by a cold beer, tequilita (beer and tequila), or michelada (beer and lime juice).

Sometimes the nibbles are downright strange such as chinchullines served as an appetizer at an Argentine restaurant we visited one Sunday. I don’t know if this dish is Argentine or Mexican, but nevertheless I found it quite out of the ordinary. I have to admit, it challenged my tastebuds and stomach….so I closed my eyes and took the plunge!

What you see here are fried cow intestines with the texture of hard chips. They are eaten on a small, soft corn tortilla with a drizzle of thin green or red salsa. I’m not sure it all worked together as it seemed a bit dry and odd-tasting. At the same restaurant we had mollejas, grilled slivers of meat taken from the cow’s throat (these were more appetizing and tasty) and empanadas which turned out to be delicious.

We traveled to Tonalà where the streets abound in a  dizzying array of foods and textures.

A woman selling candy, dried fruit, and sesame seed cakes. We tried one of these; I was surprised by its wholesomeness.

And look at the fruit stand! Check out the size of the pomegranate seeds in the cup. I love the beautiful and artful display of fruit, right on the cart. One of favorite of the day was the cart with tacos al vapor.

These are tacos made with corn tortillas, filled with shredded pork and spices,  placed layer upon layer in a deep pot and then steamed for several hours. They were soft, tasty, and oh so good I could have had more!

More mouthwatering examples of street food. People come by and order a taco or sopes made to order topped with sauces, freshly shredded cabbage, and crumbled cheese. 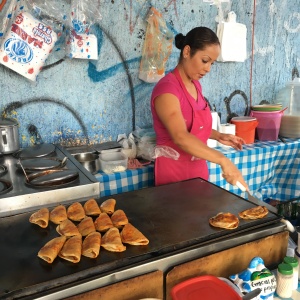 I had to take a photo of this one, dried grasshoppers served with a squeeze of lime on top.

And chicharrones! Take a look at the size of these babies!

We are used to seeing chicharrones in potato chip bags….not these! I was fascinated by their size  I’m not sure what is in the bucket…probably some chile sauce to pour over the slabs. The vendor wanted me to pay five dollars for taking this picture….joking of course.

And back at home in Guadalajara, we couldn’t miss having the tortas ahogadas  a typical dish from this area. Literally, this means a drowned sandwich and is so messy to eat. 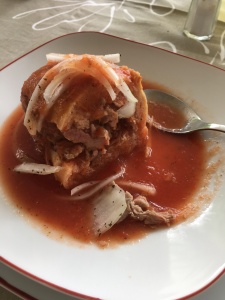 The reason the tortas ahogadas from Guadalajara are so special is for the bolillo bread which gives the dish its special character. The rolls are scooped out and filled with shredded pork or beef. You pour a light tomato sauce (it’s not spicy) over the tortas and top with onions. We were admonished, you eat with your hands, not knife and fork! As you eat,  you continue to spoon the sauce over the sandwich. Messy, but delicious!

Another messy sandwich in the same vein as tortas ahogadas is the lonches bañados, another delicious variation of the “wet” sandwich. 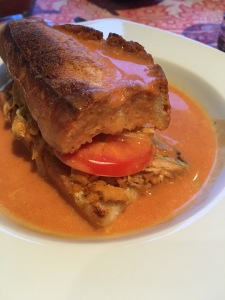 Here you can see how my niece has laid out the sandwiches before serving. The bread is more like a baguette, a little sturdier than the bolillo. Again, the inside of the sandwich is  filled with shredded pork, but with the addition of sliced tomatoes and onions. You can add pickled jalapeños and carrots to spice it up. The sauce is creamier and thicker….and the whole effect – heavenly and terrifically sloppy.

Traveling in Jalisco, Mexico and becoming acquainted with its street food has shown me how varied the dishes and foods are in this country, how important food is to its people and how connected it is to the land and climate. In the next post I’ll write about the growing sophistication of Mexican cuisine as I saw it in the restaurants we visited.

I started blogging mostly for my sons who kept asking me,"Mom, how do you make...?" I had so much fun that I began to widen my circle to my mother (my greatest model of cooking genius), sisters, greater family in Italy and Mexico, friends, neighbors, and colleagues. An English teacher by profession, I'm always looking for creative outlets to express myself in the kitchen. Having grown up in Rome, Italy of an Italian family and married into an Italian family with ties to Mexico, I'm drawn to both cuisines. Here are my musings, inspirations, creations and food adventures from my kitchen to yours! Salute! View all posts by Vickie

8 thoughts on “Street Food and Nibbles”

This site uses Akismet to reduce spam. Learn how your comment data is processed.

Looking for Something Special?